Recently the New York Times ran a editorial and an article about animal rights, both pieces prompted by Spain’s recent action to grant some legal rights to certain apes.

To talk about animal rights, we must first recognize that the phrase has become a politically loaded term, used in unhelpful ways by extremists. Extreme animal rights activists have from time to time said and done some outrageous things. Anti animal rights extremists have also said and done outrageous things. But as with most volatile issues, if we are willing to tune out the extremists and look past the inflammatory rhetoric, the rest of us can probably find some common ground.

I suspect most of us can agree that the abuse of animals is wrong. Animals in our care should have adequate food, water, shelter and be protected against physical harm. But does habitat destruction- which causes the loss of food,

water and shelter- constitute abuse?  Is all human use of land wrong? Or are some human changes to the earth acceptable, even beneficial?

What about experiments on animals? If the outcome of the experiment is the death of the animal, should we allow that? But on the other hand, what if human lives are saved by the research?  How do we understand human life in relation to gorilla life? Or robin life? Or carpenter ant life? Is it even possible for us to objectively decide these things?

So even if we start with common ground, such as the abuse of animals is wrong, the ethical problems become difficult very quickly. This issue requires some careful thinking on our part. We need to do it, the moral and ethical decisions are too important to leave to the extremists. But I don’t think there are clear, simple answers to these ethical problems. Apes may require different “rights” than say lizards. But how do we know?

Historically, what we have “known” about animals has changed dramatically. Only a few hundred years ago, philosophers and scientists seriously debated the question of whether animals could feel pain. We used to think animals couldn’t communicate with each other, couldn’t learn, couldn’t feel emotions. Today we have learned that animals do communicate, learn and feel emotions. In light of our growing knowledge about the lives and experiences of animals, any conclusions we draw today are necessarily provisional. New information will necessitate our continued rethinking about animals and our relationship with them.

Often Christian discussion about our responsibility towards animals centers on the “dominion” command in Genesis 1:26.  Historically dominion belongs to royalty. It implies power and control. In human hands the exercise of dominion has resulted in abusive power and exploitation.

Additionally we humans bear the image of God. In the ancient near east, images of gods were understood to contain in some way some of the characteristics and presence of the god. Christians have understood what it means to bear the image of God in a variety of ways, some helpful, some not so helpful. But mostly we believe that in some way, we are God’s agents in the world. This doesn’t mean that God isn’t involved and has left everything up to us. It does mean than we carry an important responsibility as the image bearers of God. 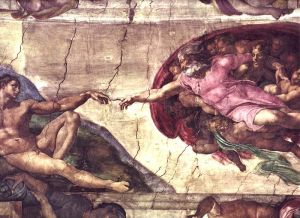 One of the ways we have missed the mark is that we have used the example of human kings to shape our idea of God. We have chosen a false image to bear. We should look first to the God revealed in Scripture and most importantly for Christians, to God revealed in Jesus Christ.

The discussion is beginning. Think about how often we hear and read about green technology, carbon footprints, sustainable energy, organic foods and yes, animal rights. It is important for people of faith, any and all faiths, to be part of the discussion. We need to come to the discussion having thought carefully and theologically. But not to convince everyone else they must follow our religious beliefs. We must do our theological thinking so we understand, as clearly as we can, why the discussion is important and what we have to contribute to the conversation.

In some earlier posts, “God and Dog” , “God and Dog and Genesis”  and ” In the Image of God: What it means to be human”, in particular, I also offer some  Christian rethinking about our relationships with animals.

3 thoughts on “God and Dog and Animal Rights”