Part of my reason for writing about the H1N1 influenza outbreak and epidemiology and industrial farm animal production is to make the case that people of faith need to be paying attention to these things. In the news this week there was an example of why this matters. The World Health Organization is concerned that people in poor nations will not have access to a vaccine against the H1N1 flu if a large scale vaccination effort becomes needed. Some wealthy countries have already signed contracts with vaccine manufacturers reserving millions of doses of vaccine.  Vaccine manufacturers, as of  Tuesday, were reluctant to donate or to offer the vaccine at a reduced cost to poor nations. The exception being GlaxoSmithKline who offered to donate 50 million doses and to supply more doses at a reduced cost.  You can read the AP report here. The United States is not one of the countries that has signed contracts for the H1N1 vaccine, but we have set one billion dollars aside in case mass vaccinations become necessary.

The same concern exists for the availability of antiviral medications. According to Doctors Without Borders, many developing countries do not have medications stockpiled and neither do they have purchase agreements with drug manufacturers.  Poor people in developing nations are at higher risk from influenza because  their health may be compromised by the high probability of malnutrition and preexisting disease conditions.

What is a poor country to do?

What should people of faith be doing?

What should the church be doing?  What should denominations, para church organizations, and international faith based relief organizations be doing? I hope they are quietly yet deliberately making preparations. I hope as individuals we are staying informed, asking questions, and encouraging  appropriate planning. 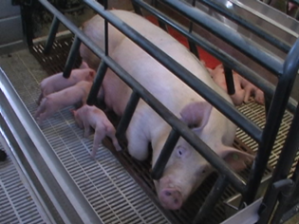 Last week, I said we would think about farming today. In spite of what I said about “narrowing” our focus- farming is a really big topic. The Pew  Charitable Trusts commissioned the Pew Commission on Industrial Farm Animal Production through a grant to the Johns Hopkins Bloomberg School of Public Health. The Commission spent two years researching the topic and released their findings in April 2008.  The web site has a vast amount of high quality information including the entire study , an “executive summary“, a series of technical and background reports, and a long list of links to other resources which represent a variety of viewpoints on these issues.

If you have paid any attention at all to farming issues, you won’t be surprised by what the Pew Commission has to say about antibiotic use, ground water contamination, pesticide and other chemical use, health concerns for farm workers, animal welfare and the effects of big agribusiness on rural life. If you haven’t paid much attention, take some time and read the information  found in the links in the  previous paragraph.

The Commission looked at four general areas, public health, rural life, environment, and animal health. I found the “Preface”  by Robert P. Martin (beginning on page vii) particularly interesting when he wrote about the influence of the agriculture industry and its attempt to influence the work of the commission.

I also appreciated the Commission’s brief review of agricultural history and how we arrived at our current farm system. As they noted, no one was trying to create a method that harmed people, animals or the environment. The initial intentions were to provide inexpensive, safe food. Every farmer I ever met took their responsibilities to provide healthy, safe food every seriously. They take their responsibility to the environment seriously. They take their responsibility to the general public seriously. Unfortunately the system has become deeply flawed and in the opinion of the Pew Commission (among others) unsustainable.

We have some serious problems in American agriculture. How can we bring change to such a large and complex system? There are big businesses with a lot invested in the status quo and if Robert P. Martin the Executive Director of the Pew Commission on Industrial Farm Animal Production is correct, they are very powerful. Effecting change on a large scale, before a catastrophe forces change, is exceedingly difficult.

What is a farmer to do?

What should people of faith be doing?

What should the church be doing?

Many people in the church have been involved in letter writing and advocacy for legislative change.

In the past Churches have been involved in boycotts to urge companies to act responsibly. Is this something we should be doing with food products ?

Churches have promoted “fair trade” products to encourage just, sustainable practices for certain products. Is this something we should be doing for US produced goods?

Should we be involved in helping individual farmers make a change in the way they farm? There are financial risks involved anytime someone changes the way they do business.  Should the church provide a “safety net” of some sort for farmers as they change their practices?

Do you know of churches or para church or other organizations that are working for change in farming practices?  Tell us about them. Do you have ideas about how we can improve our current system?

Bringing change to our agricultural system will take the efforts of lots of people with a variety of talents. Farmers, animal scientists, agronomists, economists, sociologists, public health workers, city dwellers, lawyers, ecologists, consumer advocates and many more. And it will take a vision of what could be; a vision of what should be.