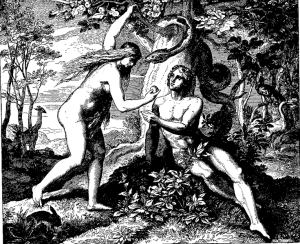 For some Christians part of their difficulty in accepting evolution is that in evolution death and violence occur in creation before the appearance of  humans and what Christians call “the Fall”. In some classical accounts of the Fall  the pre fall world is a place without death and without suffering. Death enters the world because of and as a consequence of the actions of Adam and Eve.

I think  there is a problem with this notion of a sinless, perfect pre fall world. Even a literal reading of Genesis 3 doesn’t appear to support this. What’s the problem? The serpent. The serpent, made by God (v1), who exists in pre fall Eden.

Take a moment and re read the story. It’s a rich and wonderful story full of divine wisdom and truth about the human condition.  But the text doesn’t explain how sin entered the world, it assumes that it is present. For the Genesis writer, the serpent simply exists. It is part of creation. There is no explanation about why the serpent acts the way it does. There is no explanation about why Eve and Adam listen to the serpent.  Notice in the text that the presence of a talking serpent doesn’t seem to surprise Eve. She carries on a conversation with the serpent as if that were a normal occurance.

The Bible assumes many things. For example Genesis one doesn’t  explain the existence of God. The Scripture assumes God exists. The Bible also doesn’t explain some things. Like how sin entered the world. Or why evil exists. As John Calvin and others have noted, God doesn’t explain everything to us. Some things are beyond our comprehension.  But we humans like to try to fill in the gaps.  We need to be careful, as we all know, when we read the Bible that we read it carefully with attention to the culture of the original audience and with the awareness that our reading is shaped by 2000 years of Christian theology- some of that theology better than other.

As I read the story, it seems to me that unless Adam and Even knew what death was, the consequence of eating the forbidden fruit is unintelligible to them. If you don’t know what death is, how can death be an effective deterrent? Also notice Genesis 3: 22ff. Human mortality is assumed here. Human kind must be stopped from eating from the tree of life and thus living forever.  The Biblical text does not assume that pre fall humanity never died.

Is the story about Original Sin? Of course. But remember “original”  doesn’t mean the first sin. When theologians talk about original sin they  mean the universality of sin. Original sin refers to the inescapable nature of sin. Genesis 3 has much to say about sin and how sin works in the world – it’s out there, it can be difficult to recognize, it can sound reasonable and sin has tragic, far reaching and unexpected consequences.

Is this story about the Fall?  Yes, the Fall as a description of  the human condition. Estranged from God. Deciding not to trust God but rather deciding to trust the things of the world.  It’s a story about the human inclination to idolatry, putting something (in this case the word of the serpent) ahead of God.

Genesis 3, like the first two chapters of Genesis is a text full of meaning. Christians and Jews have spent millenia pondering this text. We could spend weeks on Genesis chapter 3, it is that rich and complex.  I only focused on a small part of the storyhere- carefully and faithfully I hope.

So that objection to evolution, that there originally was a perfect pre fall Eden free of death well, I have trouble finding that in Genesis.  Perhaps we can  give that up. In fact let’s give up trying to read Genesis 1-3 as science altogether. It simply doesn’t work. As I have said before and will probably say again, to change our interpretation of the text  is not to claim the text is wrong or untrustworthy or untrue. To change our interpretation of the text is to admit we are human and need to grow and develop and sometimes that means we need to rethink the way we interpret a part of the Bible.